Creating the First All-Girls Set to Make it to Legends 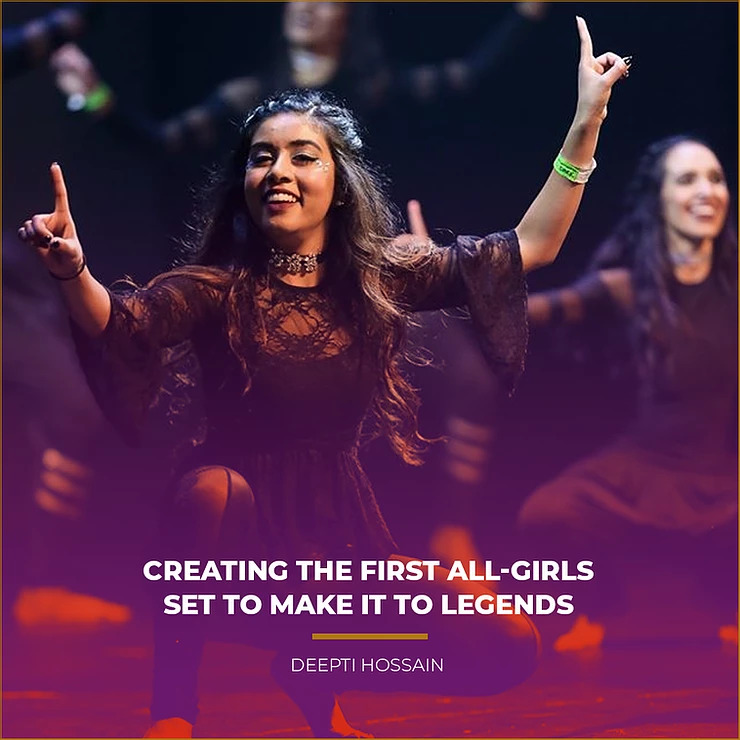 “They won’t tell you fairytales of how girls can be dangerous and still win. They will only tell you stories where girls are sweet and kind and reject all sin. I guess to them it’s a terrifying thought, a red riding hood who knew exactly what she was doing when she invited the wild in” - Nikita Gill

One of the most exciting and surreal moments of my time as a dancer in undergrad was being a part of Buckeye Fusion in 2016-2017. After almost a decade in the circuit, it was a season of so many firsts for our team: we placed ‘first’ for the first time, we went to cities Buckeye Fusion had never competed in, we had a dark and twisty theme, we didn’t have glitter on our face, and of course: we made it to Legends. There were tangible, quantifiable wins, like trophies and competition money and ELO rankings. But there were also qualifiable wins, like name recognition, being the underdog, the feeling of performing an innovative and empowering set that wasn’t quite expected— all while happening to be a group of young women.

Below are a few things from that year that might provide insight into our journey to Legends, like our thought process, our decision-making, the feedback we received—maybe even a little of the bias we faced. Disclaimer: this is my perspective and my point of view only. It doesn’t speak for everyone and might not work for every team!

Though I don’t think we believed being an all girls team defined us, it was a huge part of our identity. Simply being the only all-girls team to compete at Legends that year made us unique and radical. I was invited to write about how as an “all-girls team,” we made that happen. But to be very transparent — I never thought it would! I had already been through the ringer as captain, made a lot of mistakes, and I remember having a conversation with one of my co-captains before the 2016-2017 season began, that “there’s no way we’re going to get to nationals by being an all-girls team.” To me, that felt like a fact. I believed in us but wanted to be realistic. So, we set other goals for Buckeye Fusion that year: to have a solid audition video, compete at competitions that provided Bollywood America bid points and/or elo points, place as well as possible at competitions and be an all-girls team that is as competitive as a co-ed team. These were things Buckeye Fusion had never really done before. Looking back, it’s clear I didn’t even know what was possible.‍

Everybody wants to rule the world - Audition & Comp Strategy ‍

The audition and application process was frustrating, because we knew we had a highly competitive set and dreamed of competing at top-tier comps, like Tufaan, or compete in our home state at Midwest Dhamaka. With a bit of luck and good timing, Legends was entering its first year, and had made UGA and NDC Legends Partner Competitions -- which were the two out of four competitions that accepted us. I often heard assumptions that Buckeye Fusion strategized the ELO system (which at the time was such a new and strange concept to us) by going to the two “easy” Legends Partner Comps. But we clearly didn’t have the luxury to strategize; we simply didn’t have a lot of options. And that comment is a disservice to the fact that we, created memories of a lifetime at UGA, Naach di Cleveland and ADZ. And, though not a partner comp, we were originally waitlisted at ADZ and went on to unanimously win the competition. In this way, Buckeye Fusion proved that audition videos, and the audition process, is not always indicative of potential. ‍

There once was a girl named Red - Theme‍

All-female teams tend to fall into stereotypical “female empowerment” and “sisterhood” tropes. My first year as captain, I did this too. This isn’t a bad idea. It’s awesome, and it’s cool to be multidimensional women on stage. But it can also be limiting. As captains, we wanted to prove that there were other ways to have an empowered, theatrical, female performance.

I attribute so much of our success that year to our theme. It was the connective tissue for our choreography, costume, hair & makeup, and mix. But to be clear, we didn’t go into the planning process thinking: we’re going to subvert expectations. Our friend suggested Red Riding Hood and we loved it, especially because no one had performed this fairy tale before. We just wanted to make it our own, and hone in on our dark side. ‍

What’s the plot twist? Are our voice overs cheesy? Did we need to have a huntsman? Does Red kill the Grandma? How does Red find out her Dadi is batshit? Will a flashback make sense? It was so fun trying to come up with the different ways the story could end-- and I particularly enjoyed drafting the rhyme structure that narrated our story. It probably seems “normal” now, but our theme was dark, not in the status quo, not “hype” in the way the circuit typically views that word — and certainly not characteristically feminine. I’m not sure everyone understood what my captains and I were envisioning but we didn’t care. We loved it. We took a risk. Instead of trying to fit into a binary or a standardized box, we managed to flip the narrative.

I’ll never forget the first time we performed in Athens, Georgia. Dadi says her line about killing Red’s mother, and the audience audibly gasped. We didn’t expect that type of reaction and were honored to get it every time we performed. I personally was never privy to audiences so fully enjoying a performance, and the senior members on the team were always reminding the newbies: This is not a given, it is not typical and don’t take this for granted. ‍

That was our fairytale ending - Critiques‍

Just like any other team, after every competition, we took the judges critiques and tried to implement as many of them as we could. But a few comments were hard to digest, like:  “You were good for an all-girls team,” or “Add something shiny to your costume.” There were multiple times that year, and especially in one competition, in which we were again told we were good for an “all-girls team.” We are also critiqued that we didn’t have enough energy. Following that critique, we were then told that all-boys teams are able to showcase more energy and that it’s harder for all-girls teams to do so. We were advised to cover that lack of energy with grace.

The issue is not the critique itself, but rather the way it is framed. I’m sure that UNC Chalkaa wasn’t told that they are good for a “co-ed” team, or that GT Qurbani was good for an “all-guys” team. I’m also sure that there are multiple guys teams who need energy too. We did not lack energy because we were an all-girls team; we lacked energy because we didn’t train hard enough.

Language is important. By critiquing an all-girls team this way, it immediately classified us into a separate category, a category not necessarily equal to everyone else. It was also delegitimizing to be compared to male teams. All-boys teams and all-girls are different. I wish it was easier for us to look at strengths or flaws for what they are and not justify or explain them— especially with gender. I am positive that will raise the bar for not only all-girls teams, but other teams as well.

When these critiques came up, we vented as a team and went onward and upward.

We were shocked, emotional and excited about Legends. I still have the screenshot of when Ashish texted me with our acceptance video. I thought I was being punk’d.

We flew to Costa Mesa and somehow Legends became the competition we were most relaxed about. We were just happy to be there. Grateful. It was one of those “pinch-me” moments. I kept thinking: were we seriously competing against Northwestern Anubhav? How did we bamboozle our way into this?

I am happy to be given the opportunity to share my thoughts here. It was fun reflecting on an incredible year. I know not everyone liked our performance or thought we deserved to be at Legends. I know I was FAR from a great captain or lead and didn’t always say or do the right things. But this I know for sure: we worked hard, showed up, performed, and did our best. I’m super proud of our performance, always will be, and am convinced that all-girls teams were born to be the underdogs (or underwolves lol). 💯

Deepti Hossain is a Digital Campaigner with the National Resources Defense Council. She was a former captain of Buckeye Fusion. Check out more of her stuff here: @Deepti_Hossain