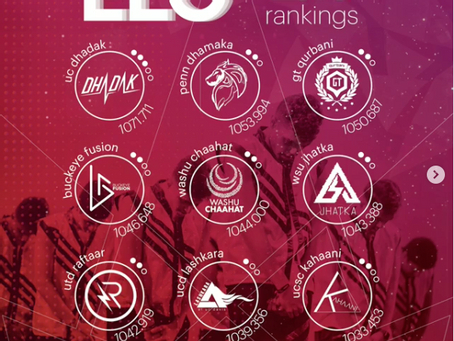 We're more than halfway through the season and things are heating up! Check out our top 9 ranked teams in the circuit below with upcoming competition dates and notable matchups:‍

Dhadak didn’t compete this past weekend, but their 2nd place finish at Jhalak and two subsequent 1st place finishes were enough to keep them atop our leaderboard this week even after a four competition weekend. The next time you’ll see Dhadak and Team Avatar take the stage isn’t until March when they head to Iowa City to  compete at Nachte Raho.

Penn Dhamaka picked up a 2nd place finish this last weekend at Infusion placing behind UCD Lashkara (8). With their win this weekend Dhamaka moved up one spot on our leaderboards but still couldn’t get enough points to dethrone UC Dhadak. It was Dhamaka’s second competition of the season, leaving them with only one more competition, Maryland Minza. This may be one of the hardest competitions of the season. As of now, the #2, #3, and #4 ranked teams will all be competing and seven of the eight teams have placed at at least one competition this season. Keep an eye out for Penn Dhamaka (2) at the end of the month when they look to continue their successful season at Maryland Minza.

This past weekend we got our first look at GT Qurbani since their first place finish at Jhalak during first semester. Their theme this year is Avatar: The Last Airbender. Qurbani pulled away with a 2nd place finish at Midwest Dhamaka this past weekend,  boosting them into third on our leaderboards. They placed behind Buckeye Fusion (4) who they will see at their final competition of the year at Maryland Minza. Qurbani is looking for their second Legends appearance in four years, but before they can do that they’ll have to make it through an extremely tough Maryland Minza lineup.

Midwest Dhamaka was the first time we’ve seen Buckeye Fusion since they placed third at Aaj Ka Dhamaka. Previously unranked, their first place finish at Midwest Dhamaka propelled them onto our leaderboards, earning them a #4 spot. This all female team is looking to follow up a phenomenal season last year which saw them place third at Legends, making them the first all female team to do so. Like our previous two teams, Buckeye Fusion will compete in two weeks at Maryland Minza. After that they only have one more competition, Tufaan, which may prove to be just as difficult a lineup as Maryland Minza.

For the first time ever, Washu Chaahat has made our leaderboard. Previously ranked 13th, Chaahat came into Jazba with a third place finish under their belt from Aa Dekhen Zara but looked hungry for more. Their performance earned them a second place finish this past weekend at Jazba, a 10 team competition. Chaahat has over a month until their next competition which is the very last weekend of the regular season at Oak City Revolution.

Wayne State Warrior Jhatka did it again this last weekend at Aaja Nachle as they won 2nd place with their incredible production of the Little Mermaid. Their performance placed them above a Chicago Adaa team that was previously 5th and UCSC Kahaani (9). With their placing Jhatka moved up a spot on our leaderboard, taking down UCSC Kahaani who held #6 on our leaderboard last week. The next time we see Jhatka will be  March 7th at Aag Ki Raat, their final competition of the season.

UTD Raftaar didn’t compete this last weekend and, sadly, they won’t be competing until the very end of the season at Tufaan. Because of that, Raftaar fell from #2 to #7 this last week. Don’t SLEEP (yeah I just did that) on this team though, they’ll be looking to take names at Tufaan as the team is still chasing their first 1st place finish in team history. Raftaar has two 2nd place finishes this season at both Jhalak and Buckeye Mela, placing behind GT Qurbani (3) and Penn Dhamaka (2) respectively.

During their first competition of the year it is clear that UCD Lashkara picked up exactly where they left off last season. Last years team placed 1st at every one of their regular season competitions and this years team started on the same foot. Lashkara were crowned champions of Infusion 2020, placing above Penn Dhamaka (2). Lashkara is right back in action this weekend at Tamasha SD where they’ll go up against UCSC Kahaani (9) and UCLA Nashaa (12).

This is the first season that UCSC Kahaani has ever been on our leaderboard, but they deserve it. Their set tells the story of Shah Jahan and the construction of the Taj Mahal and has helped them place at both of their competitions so far this season. They finished 3rd this past weekend at Aaja Nachle behind UT Nach Baliye and WSU Jhatka (6), but did place above previously ranked #5 Chicago Adaa. Kahaani is back in action next weekend when they head to Tamasha SD to compete against UCD Lashkara (8) and UCLA Nashaa (12).